In Europe, there is nowhere wilder or more remote than Tusheti. Mountain pastures are carpeted with the fierce colors of rare flowers, bears and mountain goats roam the forested slopes, and eagles circle above the peaks. Occasionally, you come across an ancient village built from gray stone and slate. Medieval watchtowers rise from the hillsides, as they have done for many centuries, protecting the locals from invasion.

This mystical land in the north-east of Georgia, just across the mountains from Dagestan and Chechnya, is still alive with tradition today. The Tush locals return to their villages in early summer, when the harsh winter conditions subside. Many make the difficult journey from Alvani in Kakheti to Tusheti on foot, driving their sheep and livestock up the Albano Pass. These are the shepherds.

Shepherds huts are perched on hillsides and mountain tops throughout Tusheti. From June until October, they host the shepherds and their flocks. I was lucky to spend a few days with three of them. 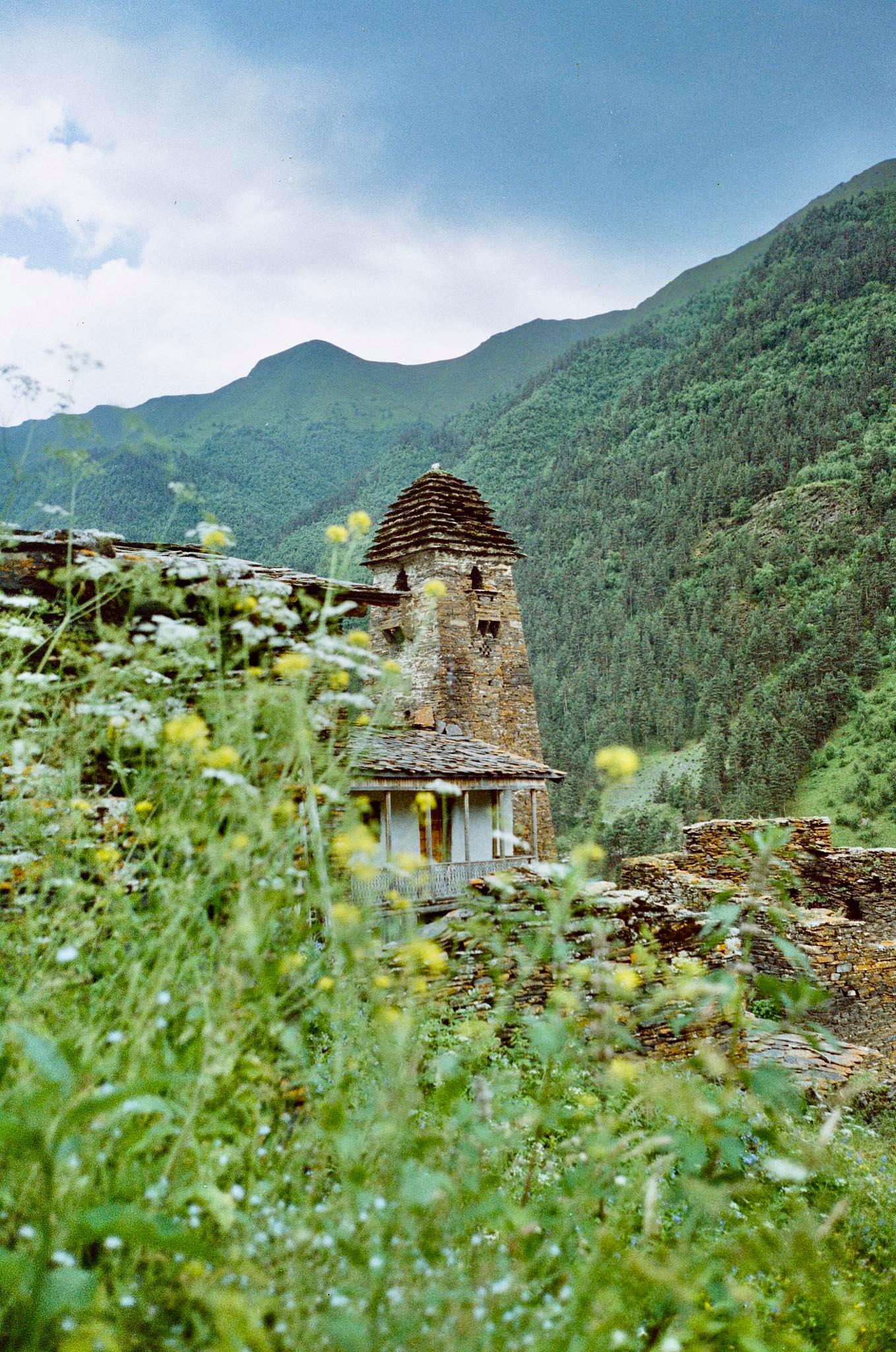 “To sinful wanderers – those who die with no one to remember them by,” Elizbar, one of the shepherds, raises his glass of chacha in his leathered hand.

“Gaumajos,” we reply, clinking glasses. This is the seventh toast already, each drunk with a full glass.

On the table in front of us, there’s a bowl of pale yellow bread, flour and water kneaded into a donut-shaped dough and boiled in a large black pot above the fire. Soso offers me the plates of hard, salty sheep’s cheese and fresh cottage cheese. Refusal is not an option.

Elizbar and Oto, two brothers, and Soso have been shepherds for almost thirty years. Each year, they bring their flock of 1,300 sheep to this place on the green valley slopes. The hut is beautiful, built from blackened stone. Inside, huge sacks of cheese are stored ready to be sold once back in the lowlands and a fire roars in the corner.

Just up the path, past the menacing growls from Jaba and Marin, the huge shepherd dogs, there is a shelter made from wood and tarpaulin where we sleep in heavy sacks made from wool and heavy-duty canvas.

Each morning, as the sun paints the mountains golden, Oto, Elizbar, and Soso milk their sheep – all 1,300 of them. Milking is done twice per day, every day. Once in the morning and once in the afternoon. Then, there is the cheese to make. All three men have a youthful air despite their weathered skin, aged from a life spent outdoors and hardwork. A smile and a joke is never far away.

Time slows away from internet connection and clocks. Two phones hang from string from the hut – the shepherd’s only connection with the outside world for five months. As we say our goodbyes, Oto writes down his phone number and name on Facebook.

“I will accept in October,” he says with a grin. He guides us along a sheep’s trail which drops into the valley as we bid the three men goodbye.