For centuries, Georgia served as an offshoot of the renowned Silk Road, seeing merchants passing through with goods to trade and many settling to make a life of it. Much of the Caucasus depended on Tbilisi’s economical potential as the capital of Georgia brought together not only Georgian, but also north and south Caucasian products and craftsmanship. Famous Georgian scientist, historian and researcher Ekvtime Takaishvili wrote that the Tbilisi bazaar “is a living organism, actively functioning from early morning till midnight and sometimes even throughout the night.” Aside from sellers and buyers, Tbilisi bazaars were used by members of society as a gathering place, a place they could hear and discuss the latest news and where orders and political or governmental decisions were spread by people called ‘Jarchi’.

There were three main bazaars in Tbilisi at the beginning of the 19th century: Erekle II Square, between the Sioni and Anchiskhati churches, in Tatar Square near Narikala fortress and the famous Rusi’s Bazaar (Russian bazaar) near Baratashvili Bridge.

The closest you can get to that old-world trading feel today is Old Tbilisi, where street names still reflect the purpose they once served and where some market buildings still stand as evidence of Tbilisi’s bustling past. Let’s explore.

The touristy bar-filled Maidan area sees the intersection of the narrow Iron, Silver and Cotton Rows, hinting at the trade once carried out there. Where the bars stand there were shops and workshops on both sides of the street. On Cotton Row, one could find traders in cotton and wool. Silver Row once housed goldsmiths, and present-day Shardeni Street was called ‘Dark Row’ due to its trading area being covered with roofs, something you can get a sense of heading into the ironmongers’ section at today’s Eliava Market just out of town! In 1981, the street was reconstructed and renamed “Shardeni Street” in honor of Jean Chardin who gifted Tbilisians a map of the city. 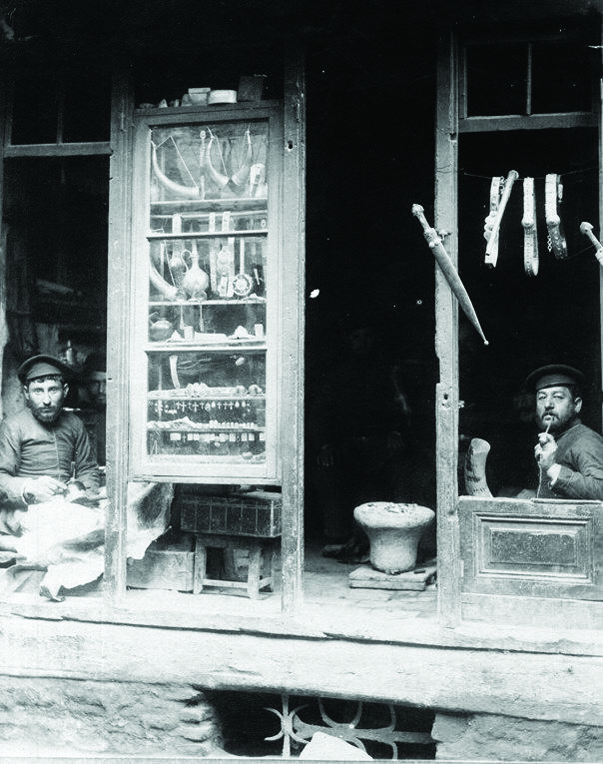 The main means of heating in Tbilisi of olden days was wood charcoal, which was created by burning specially chosen firewood brought down from the surrounding hillside. Originally, coal was sold in the firewood market in Tbilisi (near present-day Liberty – Freedom – Square) but by the mid-19th century, the location had moved to Tatar Square, which today is known as Gorgasali Square. As a point of interest, as this square stood in front of the fortress, it was originally named Tsikhismoedani (Fortress Square), but when Persians conquered and held that fortress, the people renamed it Tatar Square. They often gave the conquerors of a different faith the common name "tatars". In Tatar Square, one could buy practically everything: food, drinks, gold and silver.

On the other side of the bridge, in Market Square (now Rike), hay was sold for camels, horses and cattle coming to Tbilisi. One of the main shopping districts of Old Tbilisi, Rastabazar (located on today's Erekle II and Sioni streets) served grain and flour traders in an area specified as “alabhana.” 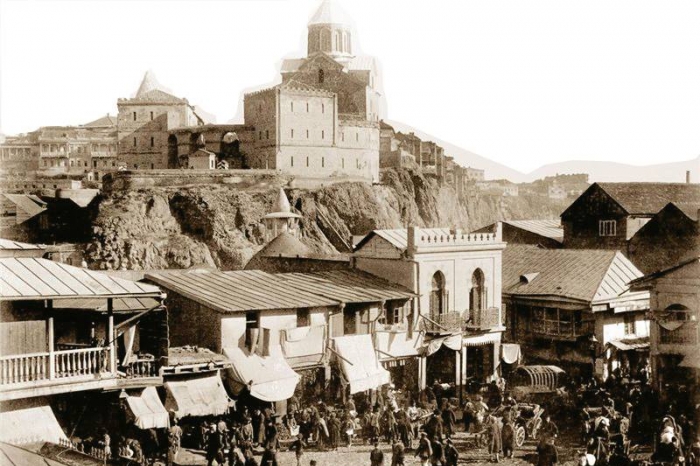 Traders of water, Tulukhchi, walked the streets selling drinking water stored in special waterskins made of bull leather and carried by horse or donkey, which they sold to thirsty customers in pitchers. Tulukhchi were especially popular considering that prior to the late 19th century, only the Narikala and Isani palaces had their own water supply, while the rest of Tbilisi received water from the murky river or springs around the city. Later, a water pipeline was installed, and several outdoor fountains were arranged from which the population could get drinking water.

There have long been trade places for wine and vodka in Tbilisi, which were called Sirajkhana, and based on historical sources, Tbilisi in the 18th century was the biggest place for consuming wine. Siraji is a name of Persian origin and means “winemaker,” while sirajkhana means “wine house.” Wine was stored in skins or wooden barrels. The first wine market was located on Tatar Square but in the late 19th century, the Sirajkhana was moved across the Metekhi Bridge to the site of today's Wine Rise. 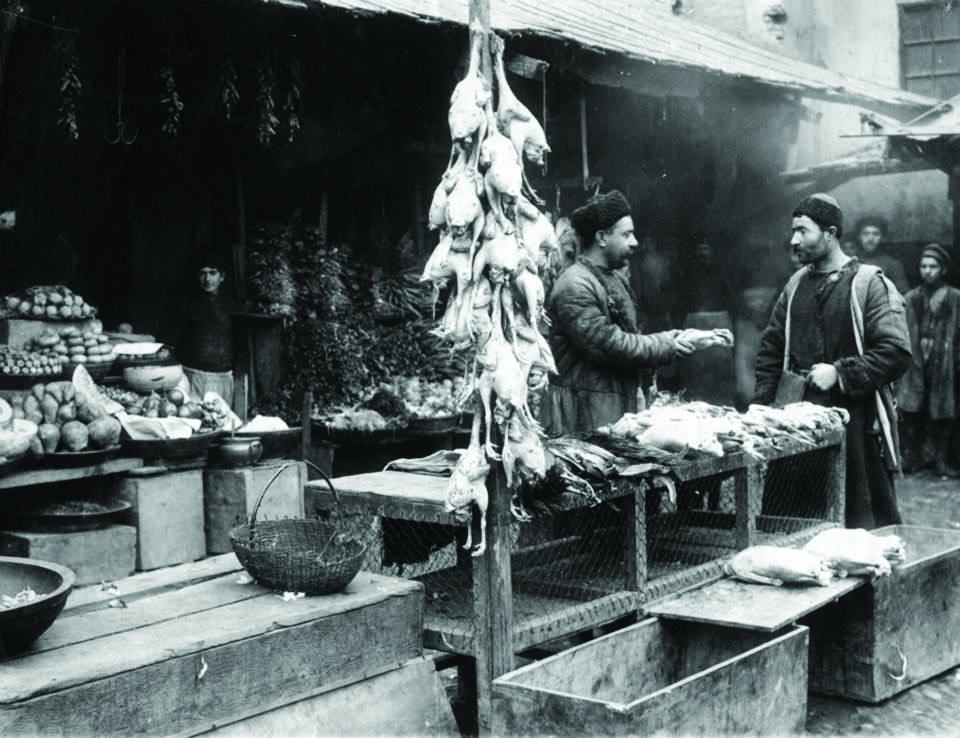 There were more than two dozen caravanserai in Tbilisi in the 19th century. One of the oldest was founded south of the Sioni Cathedral, built by King Rostom in 1638 and later renamed Royal Square and Erekle II. Karvasla, today a museum and gallery space, served as a trade center and inn. Today’s Liberty (Freedom) Square housed a caravanserai belonging to the famous merchant and patron Gabriel Tamamshev. The caravanserai was designed by Giovanni Scudieri and painted by Gagarin. Inside was the region’s first opera theater- the one so famously praised by Alexander Dumas. The theater burned down in 1874 and was never restored. In 1934, the caravanserai was lost due to a Soviet re-design of the square. It also housed a theater.

Molokan’s Bazaar was founded in the 1830s when the Molokan sect was exiled to Georgia. They made settlements on the territory of the Kukia district and in 1860 founded their own bazaar selling riverfish, salt, vegetables and milk.