where to go
where to stay
where to eat
where to drink
where to buy
Khinkali: A Primer for the Uninitiated and the Curious

Few visitors to Georgia go their entire stay without encountering this jewel that adorns virtually every restaurant menu. For locals, it’s a part of life and an important component of spending time with family and friends at a local restaurant. Many have their specific preferences, only going to consume this dish at certain restaurants. Like many region-specific cuisines, people become vehemently loyal to a specific style.

This little ingredient-filled dough dumpling-like treat is in virtually any shop, market, restaurant, and local stomach you can find. The fillings are various. These include the common minced meat mix, potato, mushrooms, and herb and cheese blend, and even the more unusual seafood variation. Regardless of which you grow most fond of, the history is even longer than the list of ingredient combinations.

Khinkali are supposed to have made their way from Mongolia sometime around the 13th century. This is due in part to the location of Georgia at the heart of the Silk Road trading route, but also since the Mongols had a knack for finding unique places to conquer. According to legends surrounding the food, the Mongols would wrap the beef in dough to make it easier to carry in their kit, since carrying beef in your pockets is generally thought to be a bad idea when on horseback for long periods of time.

Constructing these delectable creations is a rather simple process, but requires a certain amount of practice and needs to be done perfectly. From a dough mixture that varies by region and restaurant, a small circle is cut and rolled to a reasonable thickness and diameter. From a bowl with the desired mixture inside, a spoonful is scooped and set in the center. The dumpling is then wrapped in the ubiquitous pleated style. 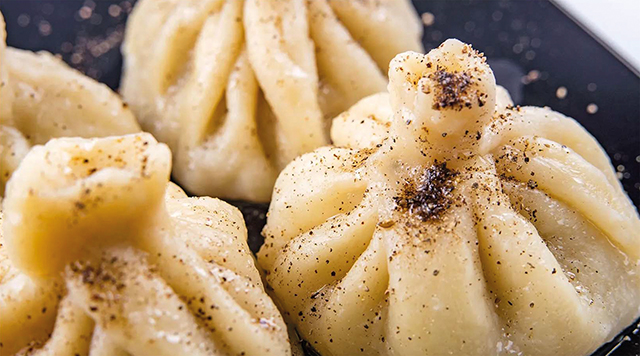 Khinkali are often topped with freshly ground pepper, though sometimes salt, paprika, or herbs are used as well. By Aleksey Suvorov/Alamy

Consumption being a simple process of depositing the assembled khinkali into hot water, they made a hearty meal when on the campaign trail. In Georgia, their origin is contested, and said to come from the mountainous regions of the north. Originally filled with a pork filling, their warm broth-filled centers and high fat and protein content is praised in the harsh winters and difficult terrain. Khinkali that are not consumed immediately are often fried in oil as a follow-up meal.

One of the more entertaining things, surely, as a local, is the interesting attempts newcomers make at eating these. The task for a newcomer, to enjoy this meat-and-broth bubble without covering either yourself or the table, is daunting at first. It’s generally correctly done by grabbing them by the “head” or knot of dough, holding that downward, and biting into the pocket to get at the juices. With the most common Khinkali being the beef mince mix, the cooking naturally creates a pocket of cooked beef and juices.

Don’t be alarmed when seeing someone audibly sucking these juices out at the first bite: those juices are not only immensely flavorful, but traditionally highly valued, so much so that it is not uncommon to see grown adults drinking these juices out of the plate they just finished using. Upon finishing one, another is quickly seized and prepared, many giving them a light dusting of ground pepper and sometimes salt.

The knot, however, is not eaten. It is said to be kept on the plate as a sign to all of how many you are capable of eating, a testament to your manhood or womanhood, though some Georgians have laughed this off as a tourist trick to get them to eat and buy more. If you’re enjoying it, then that’s all that matters, right?

The concept of filling a dough pocket with meats or cheeses is not particularly unique to the South Caucasus. From Chinese baozi to the Russian pelmeni and Eastern European pierogi, this idea is something that is commonplace the world over. However, it is unlikely you will make very many friends by claiming that khinkali is not truly rooted in Georgian history and culture. Regardless of the exact history, today it is without a doubt that the little pouch of special ingredients will remain a hallmark of any visit to the Jewel of the South Caucasus.