Georgian cuisine is the integral part of Georgian culture and traditions. Sampling Georgian dishes is one the most favorite activities for the foreigner tourists arriving in Georgia.

All regions of the country stand out for their local delicious dishes and they create the entire Georgian cuisine that captivates everyone who has tried it at least once.

This time, let us guide you to the top famous dishes originated from Kakheti, the “Wine Region” of Georgia, which is distinguished with its unique food traditions and wine culture.

The residents of Kakheti appreciate meet more than vegetarian dishes. Traditional dishes of the local cuisine include: Mtsvadi, Khashlama, Chakapuli, Chikhirtma, etc. As for the sweets, amazingly delicious Churchkhela (so-called Georgian Snickers) and Tatara are made from sweet grape juice (Badagi) there.

The first association which can come to one’s mind while talking about Kakhetian cuisine is Mtsvadi, also known as Georgian Barbecue, or the Dish of Kings. Traditional Kakhetian Mtsvadi is made with pork and roasted on a spit.

Mtsvadi making process is usually accompanied with drinking delicious Kakhetian wine. The meat is soft and juicy since it is made with fresh organic meat and sprinkled with few drops of Georgian wine when frying over the coal.

Preparing it is an entire ritual. Mtsvadi made outdoors, on an open fire is very special and completely different from that made at home using a frying pan or an electric cooker.

Mtsvadi can be made with pork, mutton or veal. Marinating the meat in pomegranate juice before roasting makes it especially tender, juicy and delicious. 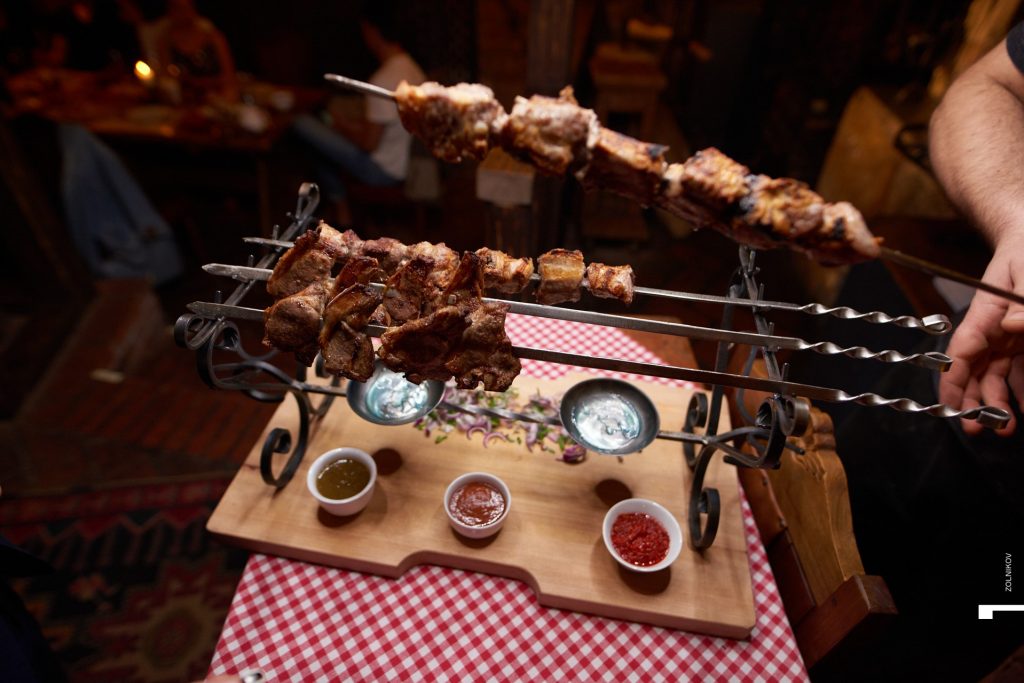 You should sample Mtsvadi with newly baked bread – Shoti, a type of traditional Georgian bread, made of white flour and shaped like a canoe, which has a very special taste and flavor. Shoti is baked in a specific bakery called Tone. In Kakheti, almost every local has traditional round clay owen, Tone, in the yard, where they bake their favorite Shoti bread.

The bread is served as any other bread, but it tends to be more popular on special celebrations such as Easter, Christmas, and New Year's Day, as well as birthdays and weddings.

Khashlama is yet another popular dish of Kakhetian cuisne.  It is delicious and simple at the same time and is prepared with boiled meat, greens, spices and local vegetables, topped with fresh herbs. In Kakheti it is traditionally made with veal.

Chakapuli is a widely loved dish not only in Kakheti, but throughout Georgia as well. This dish is made with a beef or lamb stewed in white wine, with sour plums, tarragon, leaf coriander and spices. It is usually made in spring, with the main ingredient of tarragon to make Chakapuli spicier.

Chikhirtma is a traditional Georgian soup, described as a soup almost completely without a vegetable base. It is made with rich chicken broth, which is thickened with beaten eggs (or only yolks) and lemon curd. Usually it is consumed hot and is known as the effective hangover remedy.

Tatara is grape juice thickened with flour. It is a favorite Georgian dessert made mainly with pressed, condensed grape juice (badagi). Tatara can be made with wheat flour (mainly in the Kakheti region) or corn flour (in the western part of Georgia, which is called pelamushi). Tatara is usually suitable for making delicious traditional Kakhetian Churchkhela.

Churchkhela is a type of Georgian candy shaped like a sausage made from natural grape juice and different kinds of nuts. Churchkhela is very energizing, that’s why it is often called “Georgian Snickers.” This candy is usually prepared during the harvest season in autumn for Christmas holidays. Churchkhela is the favorite candy among the foreigners, so it could be quite a sweet and pleasant present for them, especially during winter holidays.

Apart from local cuisine Kakheti Region is mostly famous for its winemaking culture that counts over 8000 years. The province is the main and the most important Georgian winemaking region. Kakhetian traditional wine technology has no analogue in the world. The basic technological process consists of pressing grape in a Satsnakheli (winepress) and pouring the grape must (badagi) in the Kvevri (large earthenware vessels used for the fermentation, storage and ageing of traditional Georgian wine). After completion of alcoholic fermentation the “chacha” (grape skins, stalks and pips) sinks to the bottom and the Kvevris are closed hermetically. In March the first racking occurs. After that wine is aged for about a year and systematically controlled.

Kakhetian cuisine would not be complete without strong and exotic local wine, so do not forget to taste it along with hearty and delicious Kakhetian dishes while visiting the region.